Baked, fried, roasted, mashed, creamy, crunchy, salty and starchy — potatoes seem designed to appeal to everyone, and I’d be hard-pressed to find a person who’s not a fan.

After all, as author A.A. Milne wrote, “(I)f a man really likes potatoes, he must be a pretty decent sort of fellow.”
While there is no bad time of year to enjoy these root vegetables, March is a particularly apt month to celebrate the humble potato and its cohort, the sweet potato. St. Patrick’s Day falls mid-month, bringing with it a host of potato-centric Irish recipes such as colcannon and boxty. And as the weather warms up, the last of the winter vegetables can start mixing with the first spring produce.
While we’re celebrating both potatoes and sweet potatoes as a group, the two are not genealogically related. “White potatoes are part of the nightshade family, and sweet potatoes are part of the morning glory clan,” said Beth Czerwony, registered dietitian at the Cleveland Clinic in Ohio.
However, both have similar nutritional benefits. “Don’t underestimate the traditional spud,” Czerwony said. “People think, ‘Oh, there’s no nutritional value, they’re basic,’ but white potatoes do contain antioxidants like flavonoids that can help reduce free radical damage.”
And if you hate peeling potatoes, you’re in luck. “I always encourage people to eat the skins,” Czerwony said, because that’s where both potatoes and sweet potatoes store their high-fiber content. Sweet potatoes are also powerhouses of vitamin A, which comes from the beta-carotene pigment that gives them their gorgeous golden color.
If you needed an excuse to tuck in to a potato or sweet potato, now you’ve got more than one. And what to choose from?
Potatoes come in a variety of textures and colors: waxy and petite red potatoes, buttery Yukon Golds, starchy russets and stunning purple potatoes, to name a few. Same goes for sweet potatoes. You’ll usually find the popular orange jewel variety at the supermarket, but there are also garnets with reddish skin, Hannah sweet potatoes with pale yellow flesh and light brown skin, and Japanese sweet potatoes such as Okinawa with purple skin and white innards.
Pick a few different types and try them out in the following recipes and preparation ideas that are beyond the basics. Sweet or savory, spicy or comforting, potatoes are always here to fuel your cravings.

Baked potatoes are a classic preparation, but why stop with a simple plain baked spud? Bring more flavor to the potato party by making Hasselback potatoes. We can thank the Hasselbacken restaurant in Sweden for this technique, which yields creamy flesh and crispy edges in one delicious potato package.
It’s simpler than it looks: After scrubbing the potato clean, use a sharp chef’s knife to make thin slices down the length of the potato, then brush with olive oil or butter and season with salt or a seasoning blend. Roast at 425 degrees Fahrenheit (218 degrees Celsius) until the potato is tender.
The slices will open up as the potato cooks, creating an accordion of potato slices that are begging to be filled with toppings. You can go classic with sour cream and chives, but the options are wide open. Load them up with bacon and cheddar, make them Tex-Mex with salsa and guacamole, top with pesto or chimichurri, or make browned butter and sage sweet potatoes.
Or try the Hasselback’s cuter cousin, hedgehog potatoes, which are cut in both directions for a checkerboard pattern.

If baby red potatoes or small fingerling potatoes are your favorites, give them the smash treatment and get the same creamy on the inside, crisp on the outside effect without slicing or dicing. 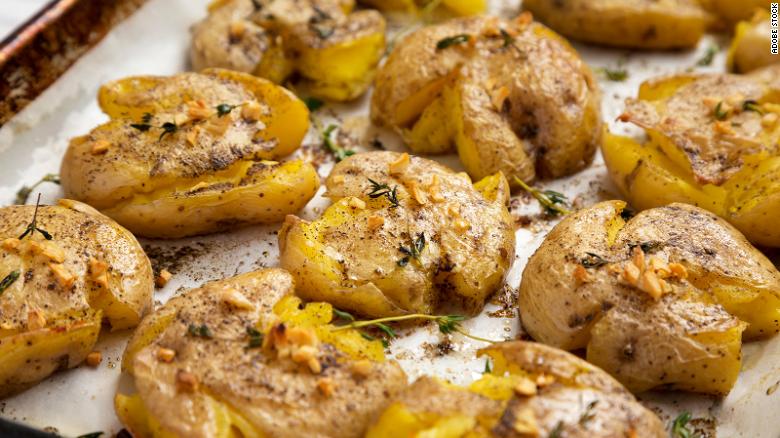 Personally, I am a fan of busting out the deep fryer to make homemade shoestring fries and thick Buffalo Wild Wings-style chips, but I know not everyone shares my affinity for boiling oil. 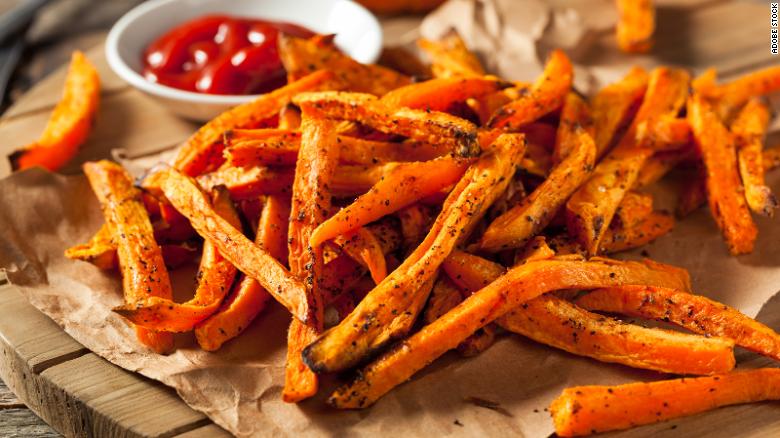 Baked sweet potato fries are great for ketchup dipping, but don’t forget chipotle ranch dip or garlic aioli.
“I’m a huge fan of air frying everything,” Czerwony said, since it gives potatoes a crisp exterior without adding extra fat. Air fryer sweet potato chips, regular potato chips or fries can be seasoned with just about anything in the pantry. Toss with spicy Cajun or barbecue seasoning, powdered ranch dressing, or a blend of Parmesan cheese and Italian seasoning.
And don’t forget the dipping sauces. Ketchup is a standard, but potatoes love a spiced-up chipotle ranch dip or garlic aioli, too.
Sign up for CNN’s Eat, But Better: Mediterranean Style. Our eight-part guide shows you a delicious expert-backed eating lifestyle that will boost your health for life. 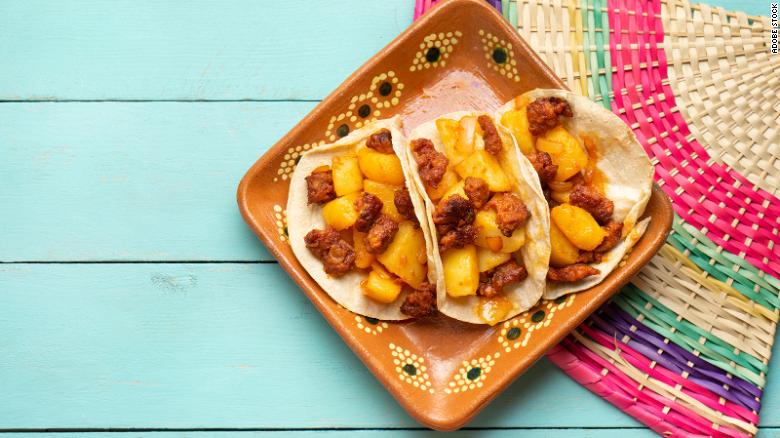 Start the day off by making a delicious breakfast of traditional Mexican chorizo with potato tacos.
Potato tacos aren’t just something invented by the fast food industry — they have a long history within Mexican and Tex-Mex cuisine, and in true melting pot style, can be combined with other vegetables, meats and sauces in myriad ways. Potato tacos every day of the week? I wouldn’t say no. Try:
• Mashed potato tacos with fresh tomato salsa
• Taco Bell-style spicy potato tacos
• Chorizo and potato breakfast tacos
• Crispy battered sweet potato tacos
• Sheet pan sweet potato and black bean tacos

‘Potato custodians’ are safeguarding this crop’s future 04:15
Sure, you can heat up a bag of frozen hash browns in a skillet, but why not go the extra mile and bust out the waffle maker for the crispiest breakfast side dish imaginable? Waffle iron hash browns can be made with fresh shredded potatoes or sweet potatoes, or a mix of both kinds of potato.
If you love latkes, this is even simpler than frying those classic potato fritters. And like latkes, hash brown waffles can be topped with sour cream, smoked salmon or any other favorite brunch accompaniments. (Caviar? Yes, I’ll be right over.) 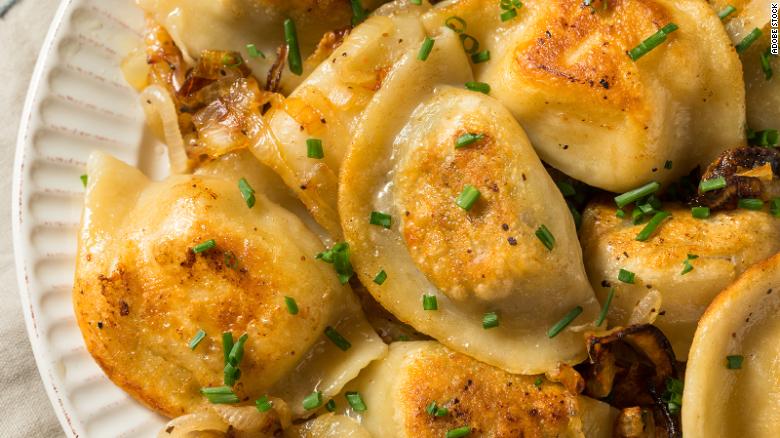 Pure starchy comfort can be found in a homemade Polish potato pierogi with onions and chives.
I admit, this one’s a little personal since I did write an entire book on pierogies. Or pierogi, or perogy, pirohy, vareniki, varenyky or however you choose to identify these Eastern European dumplings.
There are many ways to fill a pierogi, but a potato pierogi is a classic for a reason. Paired with cheddar, sauerkraut or caramelized onions, it’s pure doughy and starchy comfort. Skip the frozen boxed version just once and try your hand at making a batch from scratch.