If the post-holiday slump is hitting a little harder for you in 2022, you’re not the only one. It’s cold and icy across the country, and many of us feel like staying indoors until spring. It’s times like these when we all need comfort, and a hearty bowl of chili will cure what ails you: It might even be an antidepressant, according to a recent study.

Though various regions of the Southwest and Central America lay claim to being the birthplace of chili — San Antonio, New Mexico, northern Mexico — the food is as diverse as the population of North America, according to Robb Walsh, author of “The Chili Cookbook.”
The Aztecs and other Mesoamerican cultures made chile pepper-spiced stews with turkey, lobster and frogs, he noted, while chile peppers have been grown in New Mexico since the 1600s.
Texas has a number of competing chili origin stories, including Mexican-American War soldiers who adapted the field dish known as chili con carne and the San Antonio Chili Queens, who sold chili from outdoor stalls in the late 1800s, long before food trucks hit the scene. William Gebhardt, a German immigrant in New Braunfels, brought chili spices to a wider public when he patented the first canned chili powder blend in 1899.
It’s that adaptability that makes chili so well suited for any palate, whether you’re an omnivore or vegan, whether you want to sweat through your scalp or feel a slow burn, or whether you want to make yours with ground beef, chunks of lamb, five kinds of beans or even tofu.
As for the argument over beans’ place in a chili bowl, it’s not a recent phenomenon — they’ve been in the mix for at least a century. “Adding beans and other vegetables to chili was a response to the meat rationing of the World Wars,” Walsh said. Frugal home cooks used the produce from their victory gardens to get creative with their chili recipes, and the new traditions stuck.
No matter your eating habits, there’s a chili out there for you. Find your favorite chili from the suggestions below, or try a new variation and spice things up this month.

As any Texan will likely tell you, there are no beans in traditional chili con carne — the focus is on chile peppers and meat. “Texans don’t put beans in the chili for the same reason that Italian-Americans don’t dump spaghetti into the red sauce,” Walsh said. “Cincinnati chili and Texas chili are essentially sauces served with other foods, often with beans on the side.”
Make it with chunks of chuck roast or try Lady Bird Johnson’s famous recipe that calls for ground beef, then feel free to gussy it up with as many toppings as you like. It’s also ideal as a burrito or enchilada filling, ladled over fries or tater tots, or as the crowning glory of Frito Pie.

“White” chili gets its name from a few substitutions: Instead of red meat and tomatoes, chicken and its broth are used, and instead of red chile peppers, green chiles are the stars of the show here. Many recipes also include white beans, such as cannellini or Great Northern. 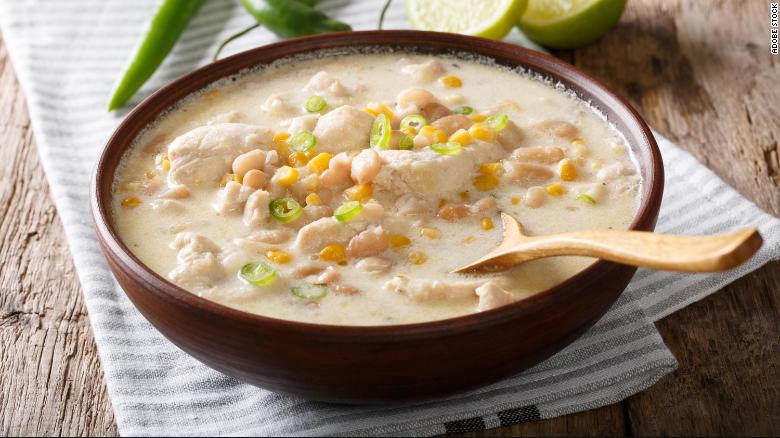 Switch it up and try making a white chicken chili, which feaures green peppers instead of red.
Make this white chicken chili on the stovetop or in an Instant Pot with either mild or hot canned New Mexican Hatch chiles, depending on how much spice you prefer. If you’re feeling ambitious, you can also roast Anaheim or poblano peppers and add them to the chili for more flavor.

Cinnamon might sound like a strange ingredient for a chili recipe, but for the Macedonian immigrants of the Midwest, it made sense. The Greek dish of pasta with meat sauce known as makaronia me kima resembled Southwestern chili, so the name was Americanized. “But they left in the cinnamon, nutmeg, allspice and cloves that make it taste so unique. And they still served it over pasta,” Walsh said. 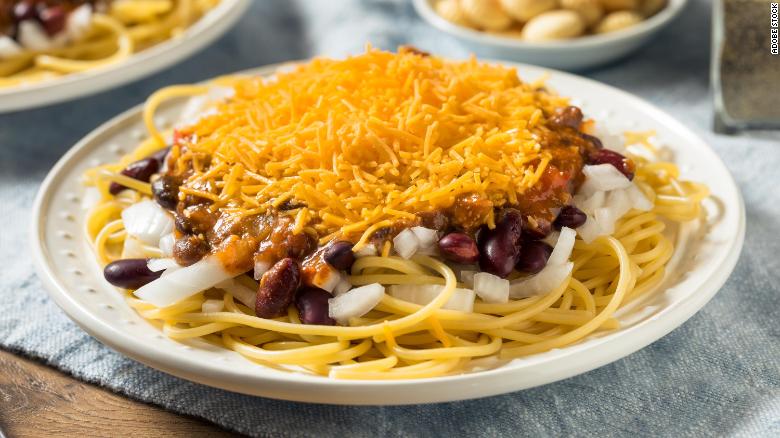 Cincinnati chili is prepared with warming spices, spaghetti, and a generous helping of shredded cheddar.
Cincinnati chili is always served over spaghetti, but the toppings can add up. Eat it “three-way” with shredded cheddar cheese, “four-way” with diced white onions and cheese, or go all the way with “five-way” chili topped with beans, onions and cheese.

“As long as it has chile peppers in it, I have no beef with vegetarian chili,” Walsh said, and this vegan chili is loaded with chiles. Sweet potatoes replace traditional stewed beef here, simmered in a sauce that features fresh chopped poblanos and ancho chile-based chili powder, along with smoked paprika. 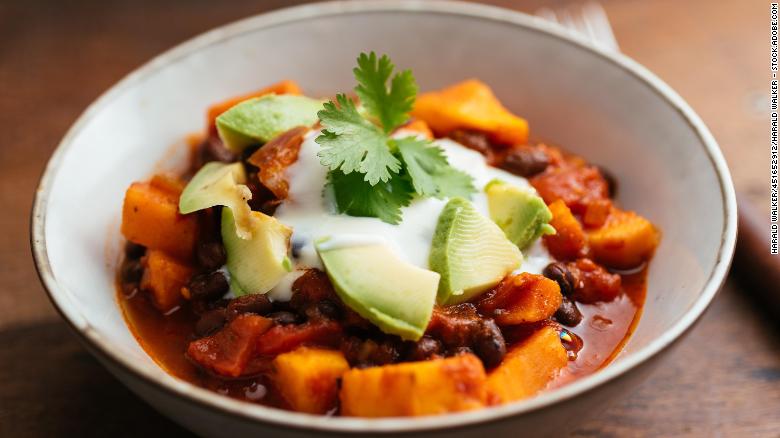 This vegan chili, made with sweet potatoes and black beans, is topped with soy yogurt and avocado.
If you have leftover cubed butternut squash or other hard winter squash, feel free to substitute some or all the sweet potatoes in the recipe.

You want beans in your chili? How about three different types of beans? This spicy vegetarian chili is loaded with kidney, pinto and black beans. The classic chili spices are also rounded out by one secret ingredient — red curry paste — to add more heat and depth of flavor. 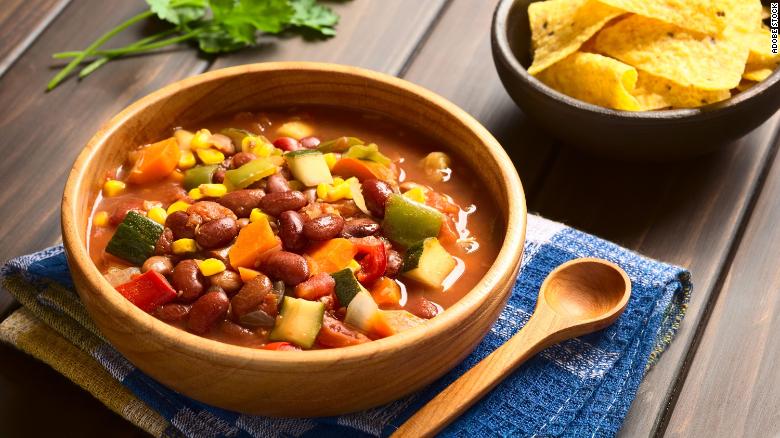 Make a vegetarian chili jam-packed with a rainbow of diced veggies and serve with tortilla chips.
Or for another variation on beans, this recipe uses refried pinto beans in place of whole canned beans to thicken the chili.
Sign up for CNN’s Eat, But Better: Mediterranean Style. Our eight-part guide shows you a delicious expert-backed eating lifestyle that will boost your health for life. 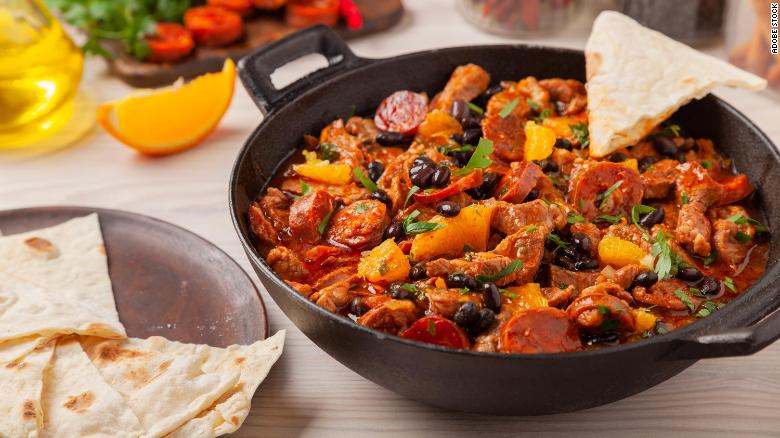 This spicy pork stew with chorizo and black beans is perfect served with tortillas and orange slices.
Ben’s Chili Bowl in Washington, D.C., is famous for serving its chili over half-smoke sausages, but you can take the idea of chili over sausage and turn it into a one-pot meal. For an internationally inspired melting pot chili, use kielbasa or andouille sausage links.