Home Get to know farro and other superfood whole grains

Get to know farro and other superfood whole grains

Quinoa has reached a level of superfood status not seen since the great kale takeover of the aughts. Equally embraced and mocked in pop culture, it’s become the symbol of the grain bowl generation. It’s not the only whole grain that’s worth bringing to the table, however.

The world of whole grains is wide, and if quinoa and brown rice have been the only grains on your plate, it’s time to expand your palate. Here’s an introduction to whole grains, along with tips for cooking and enjoying them. 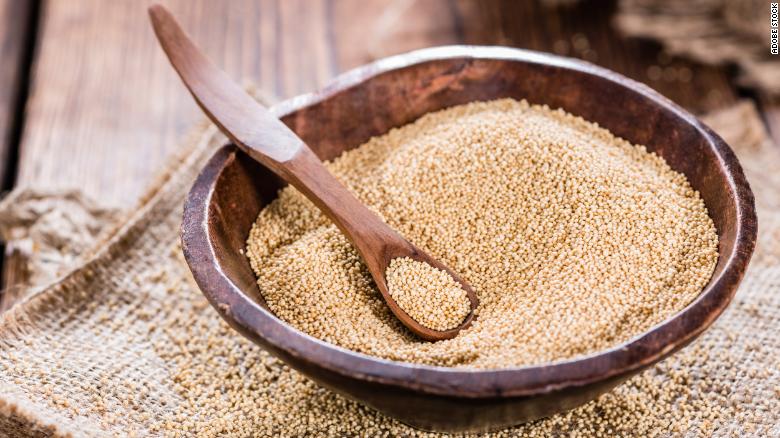 Amaranth is a tiny, gluten-free grain.
The term “whole grains” encompasses all grains and seeds that are, well, whole. They retain all their edible parts: the fiber-rich outer bran layer; the carbohydrate-rich endosperm center, which makes up the bulk of the grain itself; and the inner core, or germ, which is packed with vitamins, protein and healthy fats.
On other hand, refined grains such as white rice and all-purpose flour have been milled to remove the bran and germ, stripping away much of the fiber, protein and vitamins, and leaving only the starchy endosperm.
“A lot of people don’t realize that whole grains contain several grams of protein in addition to vitamins and antioxidants,” said Nikita Kapur, a registered dietitian nutritionist in New York City. With every serving of whole grains, “you get a ton of minerals, B vitamins and fiber, which is especially important for gut health.”
So-called “ancient grains” fall under the umbrella of whole grains, though the phrase is more of a marketing term than a marker of a more nutritious option. Ancient grains refer to whole grains like millet, amaranth, kamut and, yes, quinoa that have been the staple foods of cultures for several hundred years. They are not hybridized or selectively bred varieties of grains, like most modern wheat, rice and corn.
And though quinoa has gotten all the press as a whole grain superfood, there’s good reason to try others. Trying a variety of whole grains isn’t just a way to mix up your same-old side dish routine. It’s also a chance to get a wider portfolio of minerals and more into your diet.
“Suffice to say, we need to have a more diverse plant-based diet” to get the full complement of recommended nutrients in our meals, Kapur said, “and we can’t get it from the same 10 or 20 foods.
“One grain might have more manganese, another more zinc or magnesium, and another more protein,” she added. “Try one as a pasta, one as a porridge — you do you, as long as there’s a variety.”
Familiar foods like oats, corn, brown and other colors of rice, as well as wild rice (which is an aquatic grass), are all considered whole grains, but there are many others you’ll want to add to your regular repertoire.

Some whole grains to get to know 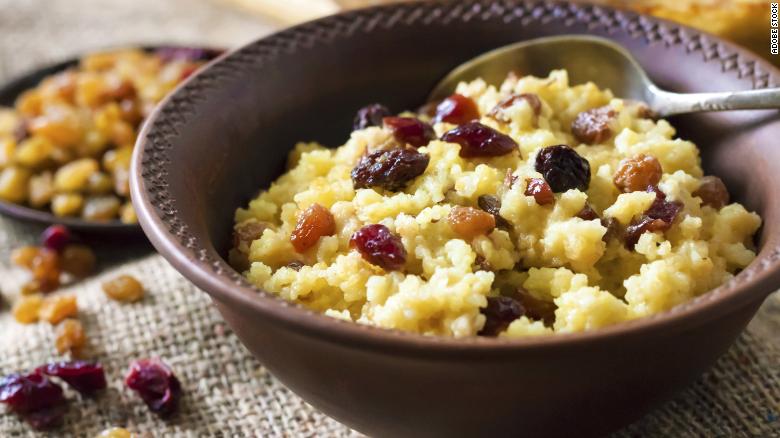 This sweet millet porridge is made with raisins and dried cranberries.
Amaranth is a tiny gluten-free grain that can be simmered until soft for a creamy polenta-like dish, but it also makes a deliciously crunchy addition to homemade energy bars or yogurt bowls when it’s been toasted. To toast amaranth seeds, cook over medium heat in a dry pan, shaking frequently until they begin to pop like minuscule popcorn kernels.
Buckwheat is gluten-free and botanically related to rhubarb, but these polygonal seeds (also called groats) don’t taste anything like fruit. You might already be familiar with buckwheat flour, used in pancakes and soba noodles, or Eastern European kasha, which is simply toasted buckwheat.
Farro is the overarching Italian name for three forms of ancient wheat: farro piccolo, or einkorn; farro medio, or emmer; and farro grande, or spelt. The farro you typically find at the store is the emmer variety, and it’s a rustic, pumped-up wheat berry that’s ideal as a grain bowl base. Or make an Italian-inspired creamy Parmesan farro risotto.
Freekeh is a wheat variety that’s harvested when unripe, then roasted for a surprisingly smoky, nutty flavor and chewy texture. Freekeh’s taste is distinctive enough that it steals the spotlight in your meals, so use it in ways that highlight its flavor. It’s fantastic in a vegetarian burrito bowl paired with spicy salsa, or in a warming chicken stew.
Kamut is actually the trademarked brand name for an ancient type of wheat called Khorasan, which features large grains, a mild taste and tender texture. It’s a good, neutral substitute for brown rice in a pilaf or as a side dish. Or try this high-protein grain in a salad with bold flavors like arugula, blood orange and walnut.
Millet is a gluten-free seed with a cooked texture similar to couscous. Teff is a small variety of millet that’s most frequently used as the flour base for Ethiopian injera flatbread. Try raw millet mixed into batters and doughs for a bit of crunch, like in this millet skillet cornbread recipe, or use either teff or millet cooked in a breakfast porridge.

How to cook any whole grain 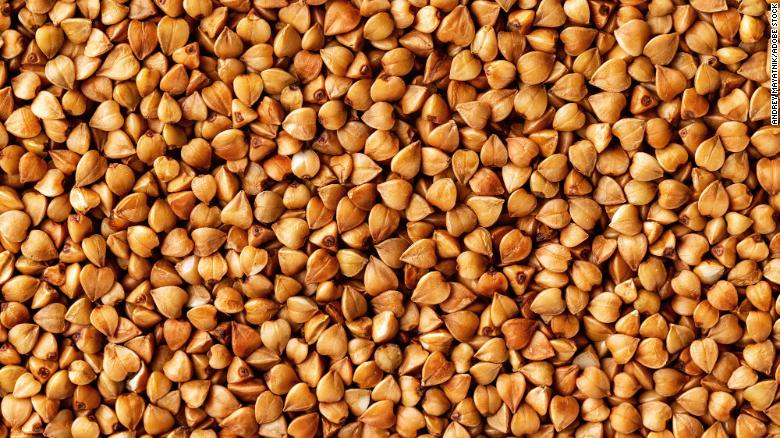 Buckwheat is gluten-free and often used in pancakes and soba noodles.
While cooking times vary for each grain, there’s one way to cook any whole grain, whether it’s a tiny seed or a large, chewy kernel: Boil the grains like pasta.
Bring a large pot of water to a boil and add a handful of kosher salt. Add the grains and cook, tasting as you go, until tender. Small grains like amaranth and quinoa can cook fully in five to 15 minutes, while larger grains like farro and wild rice can take anywhere from 30 minutes to one hour — so keep an eye on your pot and check it frequently.
Drain well in a mesh strainer (to catch all those small grains) and either use immediately or allow to cool slightly, then refrigerate for later meals. Cooked whole grains can also be portioned, frozen and stored in airtight bags for up to six months.
If you want to cook your whole grains in an Instant Pot or other multicooker, this chart offers grain-to-water ratios for many of the grains mentioned here.