Home Why You Need To Invest In A City Sarong

Why You Need To Invest In A City Sarong

The carefree beach wrap has had an uptown update: now, the sarong is meant to be lived in, all day and all night (and at the office, too).

If you had been born in the early 1900s, and were a regular moviegoer, the notion of a sarong would have been entirely inseparable from that of Dorothy Lamour. The American actress made her debut in The Jungle Princess in 1936, wearing an Edith Head sarong, and quickly became known as “The Sarong Girl”. She starred in a further eleven “jungle pictures” wearing a variation on a revealing, South Seas-style sarong wrap, in the process cementing herself as Paramount Studios’ top female box office attraction.

Movies in which Lamour wore a sarong took in more money than those in which she didn’t. That didn’t mean Lamour liked wearing them. In 1946, she publicly burned a floral sarong in front of an assembly of photographers, frustrated with her “jungle girl” image. It made no difference: she starred in a further four movies wearing nothing but a sultry number. And, perhaps as a result, the sarong was firmly parked in the “holiday” section of western wardrobes, a wrap that could be worn on the beach, and at the beach bar, but never in the humdrum of everyday city life.

That’s set to change this summer, Dorothy would be pleased to hear, as designers from Julien Dossena at Paco Rabanne to Jonathan Anderson at Loewe and Laura Kim and Fernando Garcia at Oscar de la Renta opted to reboot the sarong from beach staple to…if not quite boardroom, then certainly, office cubicle-appropriate. How to wear it now? With a boxy shirt during the working day, a T-shirt at the weekend, a silk camisole and gold jewellery for after-dark, and with an asymmetric swimsuit at the beach.

The key to its versatility lies in its length – below-the-knee – and in its fabrications. At Paco Rabanne, Dossena sent out printed silk iterations, and advised: “They look super chic worn with flat sandals and a T-shirt, and the best thing is, they’re comfortable.” He’s not wrong: on a recent holiday, one Vogue editor wore her rose-printed Paco sarong hiking in the Atlas mountains, to dinner later that evening, and for lazy days by the pool.

Don’t despair when you clock its sold-out status: Dossena told Vogue he’s reordered the style to fulfil retailers’ demands. In the meantime, shop Vogue’s edit of the best sarong skirts to buy and wear everywhere, now. 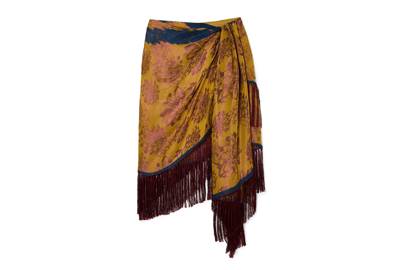 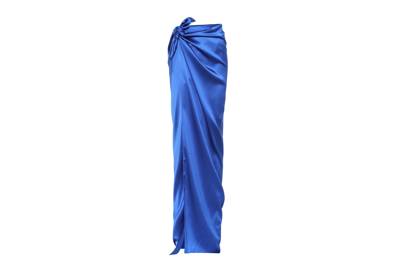